Tired of Being Hungry? Maybe You’re Hungry Because You’re Tired

Do you notice that you crave junk more when you’re sleep deprived? Think all-nighters during finals week, too many late nights in a row, or not sleeping due to stress — these are prime times to overdo. What’s going on?

It’s not in your head. Studies demonstrate a clear relationship between appetite and sleep deprivation, and the likely culprits are the “hunger hormones” leptin and ghrelin. Leptin, made by your fat cells, and ghrelin, released in the gastrointestinal tract, act as a push-pull system to regulate your appetite and energy balance. This helps you to both moderate your food intake and keep a healthy weight. Leptin, which decreases appetite, is released into your body after eating, and it helps signal you stop by making you feel full. Ghrelin increases appetite and is released when your blood sugar drops and your body needs food. 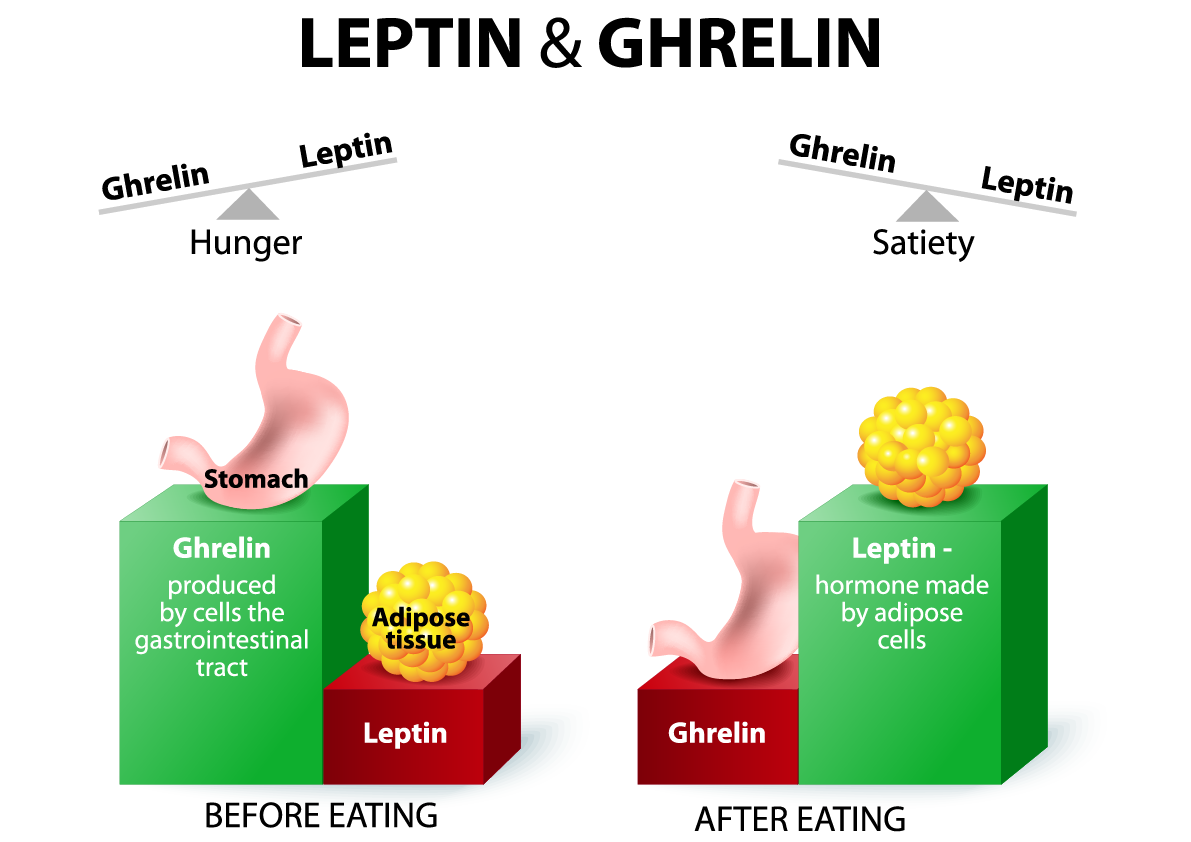 What does this have to do with sleep? Well, as it turns out, these sneaky hormones, in addition to helping to control your appetite, also play a major role in sleep. Studies suggest that sleep deprivation causes levels of leptin to drop. The less leptin in your blood, the weaker your signal is to stop eating – which translates into increased hunger. Less sleep is also associated with higher levels of ghrelin. And as hours of sleep increase, ghrelin levels return to normal. In addition, behavior studies back up what we think should happen as a result of this shift: the less sleep people get, the more they eat. When you miss a few nights of good sleep, you can expect a similar pattern, even over the short term. The hormone imbalance increases appetite, making you more likely to overeat. The good news is that restful sleep can quickly restore leptin to normal levels.

Another interesting fact: And obese individuals are at a higher risk of being leptin-resistant, meaning that in spite of high levels of leptin, leptin receptors in the cell don’t sense the presence of the hormone, so the balance is thrown off. This might explain, in part, why obesity is so difficult to reverse: the hunger hormones do not function properly.

Correlation doesn’t mean causation, but nonetheless I do like to point out this rather interesting trend: Between 1960 and 2002, average sleep duration among Americans decreased from about 8 1/2 hours to about 7 hours a night. Over this same period, US obesity rates skyrocketed from 13% to 31%.

If that’s the case, why not just get leptin injections? Won’t increased leptin fix the appetite problem? This was once a promising idea — but unfortunately it doesn’t work, unless you are leptin deficient. More does not reduce appetite or hunger. Your body is just too smart.

So what can we do? For one thing, we can get enough sleep. Studies demonstrate that this simple approach can do wonders for effective weight control. Aim for at least 7 1/2 hours every night, ideally 8 1/2. Add in your strategic diet and exercise efforts, and you’re on your way to optimal weight management.

There are effective diet strategies too, even when you’re tired. Keeping our blood sugar levels stable is key to conquering cravings and staving off hunger. Have you ever noticed that sugar begets sugar? That the more sugar you eat, the more you crave? Kill the cycle by basing your diet around foods low in sugar and high in fiber, protein, and healthy fat. And don’t allow yourself to get too hungry — eat every few hours, even if just a little, like a 1/2 ounce of nuts or a couple of bites of leftover chili or a 1/2 container of unsweetened yogurt. Drinking plenty of water is also a great strategy for feeling full and controlling portions.

And last but certainly not least, regular exercise is the best medicine for fatigue and diet fails. Severely sleep deprived? Try 3-4 mini workouts rather than one big one. You can get back to your routine when you catch up on sleep.

Is Collagen for Men Too?